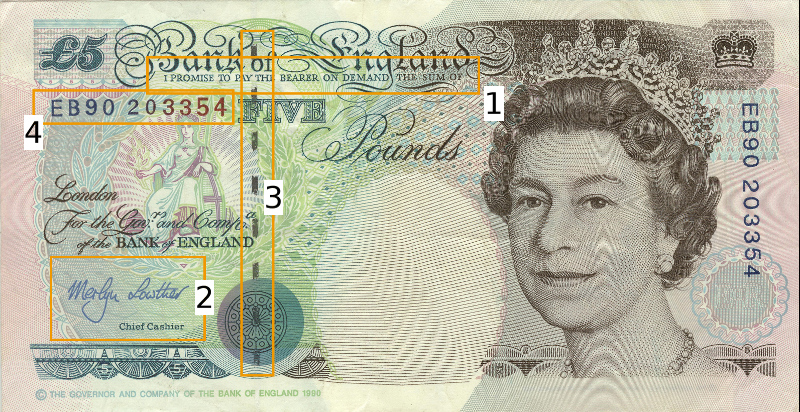 Earlier, as Alice, you authorized the creation of an Iou. The amount was 1.0, and Alice was both issuer and owner, so both conditions were satisfied, and you could successfully create the contract.

To see this in action, go back to the Navigator and try to create the same Iou again, but with Bob as owner (with Alice as issuer). It will not work. Note that the Navigator shows success an failures as a small icon in the top right, as highlighted here (it would be a small “v” for success):

Here, observer is the keyword and observers refers to the field of the template.

Next, the rights or choices are defined, in this case with owner as the controller:

Thus, owner has the right to:

You can check the correct authorization and privacy of a contract model using scripts: tests that are written in Daml.

Scripts are a linear sequence of transactions that is evaluated using the same consistency, conformance and authorization rules as it would be on the full ledger server or the sandbox ledger. They are integrated into Daml Studio, which can show you the resulting transaction graph, making them a powerful tool to test and troubleshoot the contract model.

To take a look at the scripts in the quickstart application, open daml/Tests/Trade.daml in Daml Studio.

A script test is defined with trade_test = script do. The submit function takes a submitting party and a transaction, which is specified the same way as in contract choices.

Compare the script with the initialize script in daml/Main.daml. You will see that the script you used to initialize the sandbox is an initial segment of the trade_test script. The latter adds transactions to perform the trade you performed through Navigator, and a couple of transactions in which expectations are verified.

After a short time, the text Script results should appear above the test. Click on it (in daml/Tests/Trade.daml) to open the visualization of the resulting ledger state.

Each row shows a contract on the ledger. The last four columns show which parties know of which contracts. The remaining columns show the data on the contracts. You can see past contracts by checking the Show archived box at the top. Click the adjacent Show transaction view button to switch to a view of the entire transaction tree.

In the transaction view, transaction 6 is of particular interest, as it shows how the Ious are exchanged atomically in one transaction. The lines starting disclosed to (since) show that the Banks do indeed not know anything they should not:

The submit function used in this script tries to perform a transaction and fails if any of the ledger integrity rules are violated. There is also a submitMustFail function, which checks that certain transactions are not possible. This is used in daml/Tests/Iou.daml, for example, to confirm that the ledger model prevents double spends.

To build automations and integrations around the ledger, Daml has language bindings for the Ledger API in several programming languages.

Once the code has been generated (into target/generated-sources per the instructions in daml.yaml), we can compile it using:

Now, start the Java integration with:

Note that this step requires that the sandbox started earlier is still running. If it is not, you’ll have to run the daml sandbox and daml script commands again to get an output.json in sync with the new state of the sandbox (party names can change with each sandbox restart).

The application provides REST services on port 8080 to perform basic operations on behalf on Alice. For example, check that:

returns, for a newly-created sandbox (where you have just run the init script to get the output.json file), something like:

If you still have the same sandbox running against which you have run the Navigator steps above, the output might look more like:

To start the same application on another port, use the command-line parameter -Drestport=PORT. To start it for another party, use -Dparty=PARTY. For example, to start the application for Bob on 8081, run:

The automation is based on the Java bindings and the output of the Java code generator, which are included as a Maven dependency and Maven plugin respectively in the pom.xml file created by the template:

It consists of the application in file IouMain.java. It uses the class Iou from Iou.java, which is generated from the Daml model with the Java code generator. The Iou class provides better serialization and de-serialization to JSON via gson. Looking at src/main/java/com/daml/quickstart/iou/IouMain.java: