To get a better idea of how to develop Daml applications, let’s try implementing a new feature for our social network app.

At the moment, our app lets us follow users in the network, but we have no way to communicate with them. Let’s fix that by adding a direct messaging feature. This should let users that follow each other send messages to each other, respecting authorization and privacy. This means:

Daml lets us implement these guarantees in a direct and intuitive way.

As usual, we must start with the Daml model and base our UI changes on top of that.

The Daml code defines the data and workflow of the application; you can read about this in more detail in the architecture section. The workflow refers to the interactions between parties that are permitted by the system. In the context of a messaging feature, these are essentially the authorization and privacy concerns listed above.

This template is very simple: it contains the data for a message and no choices. The interesting part is the signatory clause: both the sender and receiver are signatories on the template. This enforces that creation and archival of Message contracts must be authorized by both parties.

This completes the workflow for messaging in our app.

Navigate to the terminal window where the daml start process is running and press ‘r’. This will

As mentioned previously, Daml Sandbox uses an in-memory store, which means it loses its state – which here includes all user data and follower relationships – when stopped or restarted.

Now let’s integrate the new functionality into the UI.

The UI for messaging consists of a new Messages panel in addition to the Follow and Network panel. This new panel has two parts:

We implement each part as a React component, named MessageList and MessageEdit respectively. Let’s start with the simpler MessageList.

The goal of the MessageList component is to query all Message contracts where the receiver is the current user, and display their contents and senders in a list. The entire component is shown below. Copy this into a new MessageList.tsx file in ui/src/components and save it.

An important point about privacy: no matter how we write our Message query in the UI code, it is impossible to break the privacy rules given by the Daml model. That is, it is impossible to see a Message contract of which you are not the sender or the receiver (the only parties that can observe the contract). This is a major benefit of writing apps on Daml: the burden of ensuring privacy and authorization is confined to the Daml model.

Next we need the MessageEdit component to compose and send messages to our followers. Again we show the entire component here; copy this into a new MessageEdit.tsx file in ui/src/components and save it.

We use the React useState hook to get and set the current choices of message receiver and content. The Daml-specific useLedger hook gives us an object we can use to perform ledger operations. The call to ledger.exerciseByKey in submitMessage looks up the User contract with the receiver’s username and exercises the SendMessage choice with the appropriate arguments. If the choice fails, the catch block reports the error in a dialog box. Additionally, submitMessage sets the isSubmitting state so that the Send button is disabled while the request is processed. The result of a successful call to submitMessage is a new Message contract created on the ledger.

Note how authorization is enforced here. Due to the logic of the SendMessage choice, it is impossible to send a message to a user who is not following us (even if you could somehow access their User contract). The assertion that elem sender following in SendMessage ensures this: no mistake or malice by the UI programmer could breach this.

Next, find where the Network Segment closes, towards the end of the component. This is where we’ll add a new Segment for Messages. Make sure you save the file after copying over the code.

Following the formatting of the previous panels, we include the new messaging components: MessageEdit supplied with the usernames of all visible parties as props, and MessageList to display all messages.

If you have the frontend UI up and running you’re all set. If you don’t have the UI running, open a new terminal window and navigate to the create-daml-app/ui folder, then run the npm start command to start the UI.

You should see the same login page as before at http://localhost:3000.

Go ahead and follow more users, and log in as some of those users in separate browser windows to follow yourself back. Then click on the dropdown menu in the Messages panel to see a choice of followers to message!

Send some messages between users and make sure you can see each one from the other side. Notice that each new message appears in the UI as soon as it is sent (due to the streaming React hooks). 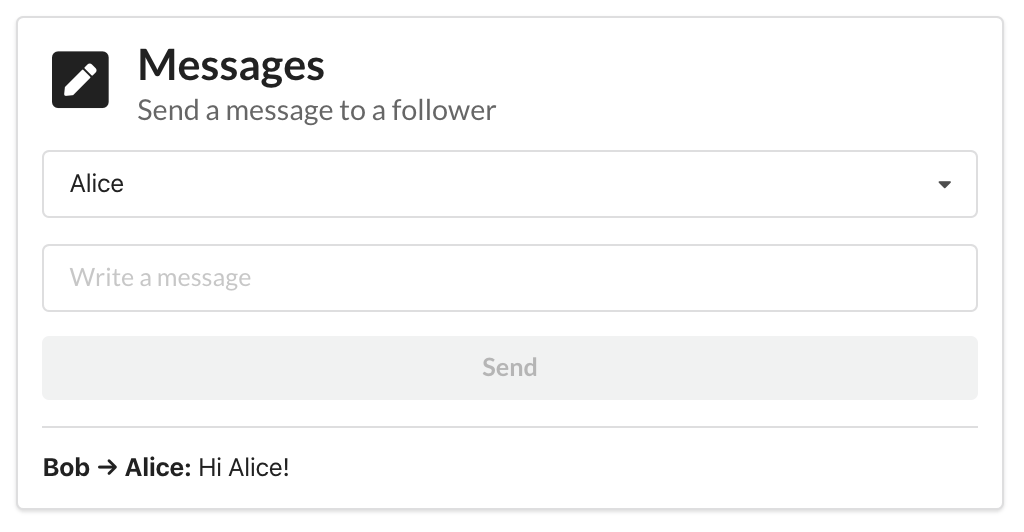 You completed the second part of the Getting Started Guide! Join our forum and share a screenshot of your accomplishment to get your second of 3 badges! Get the third badge by deploying to Daml Hub.

We’ve gone through the process of setting up a full-stack Daml app and implementing a useful feature end to end. As the next step we encourage you to really dig into the fundamentals of Daml and understand its core concepts such as parties, signatories, observers, and controllers. You can do that either by going through our docs or by taking an online course.