Lifecycling refers to the evolution of financial instruments over their lifetime. This includes processing of contractual events, like interest payments or coupon cashflows, as well as discretionary events, like dividends and other corporate actions. The library provides a standard mechanism for processing such events accross different instruments.

In this section, we first motivate the particular approach to lifecycling in Daml Finance. We then explain the process in detail using the example of a cash dividend event. Finally, we describe each of the involved components in depth.

A general principle we follow in Daml Finance is that there should only be a single instance of any given instrument on the ledger. This instance is centrally maintained by the issuer of the instrument, with the possibility for a depository to act as an additional, third-party trust anchor. As part of lifecycling, this single instance of the instrument produces lifecycle effects, which are then used across all parties on the ledger as a single source of truth for how to process a certain event. This avoids any duplication of lifecycling logic or redundant processing of instruments, and therefore removes the need for reconciliation across parties involved in the process.

In current financial markets instruments are usually referenced by a textual identifier, like an ISIN or CUSIP number. When a particular corporate action is processed on its effective date the instrument referred to by an identifier changes implicitly. As an example, the ISIN for a stock refers to the “cum-dividend” instrument (where holders are still entitled to the dividend) up until the ex-dividend date. From the ex-dividend date onwards the same ISIN refers to the “ex-dividend” instrument, so any stock acquired on or after that date is not entitled to the dividend anymore. This leads to a lot of complexity during processing of such corporate actions. In particular, it forces these events to be processed in a “big bang” approach, as a consistent snapshot of holdings needs to be taken to determine the rightful recipients of any resulting cashflows.

In Daml Finance we aim for a more efficient and flexible operating model for processing lifecycle events. All instruments are strictly versioned so that we can clearly differentiate between the cum- and ex-event version of an instrument. This means that it is perfectly safe for those versions to co-exist at the same time, and it allows for a gradual transition from one version to another. Generally, the issuer of an instrument is responsible for creating and maintaining instrument versions, and for producing the cashflow effects of a particular lifecycle event. During the lifecycle process, holders of this instrument will migrate their holdings to a new version of the instrument while at the same time claiming any resulting cashflows from the event.

Versions are usually considered opaque strings, but one can follow a numerical versioning scheme if an instrument is known to have linear evolution (i.e., there is no optionality that can result in two different evolution paths).

In this scenario we go through the process of paying a cash dividend from an issuer to an investor. The initial state looks as follows: 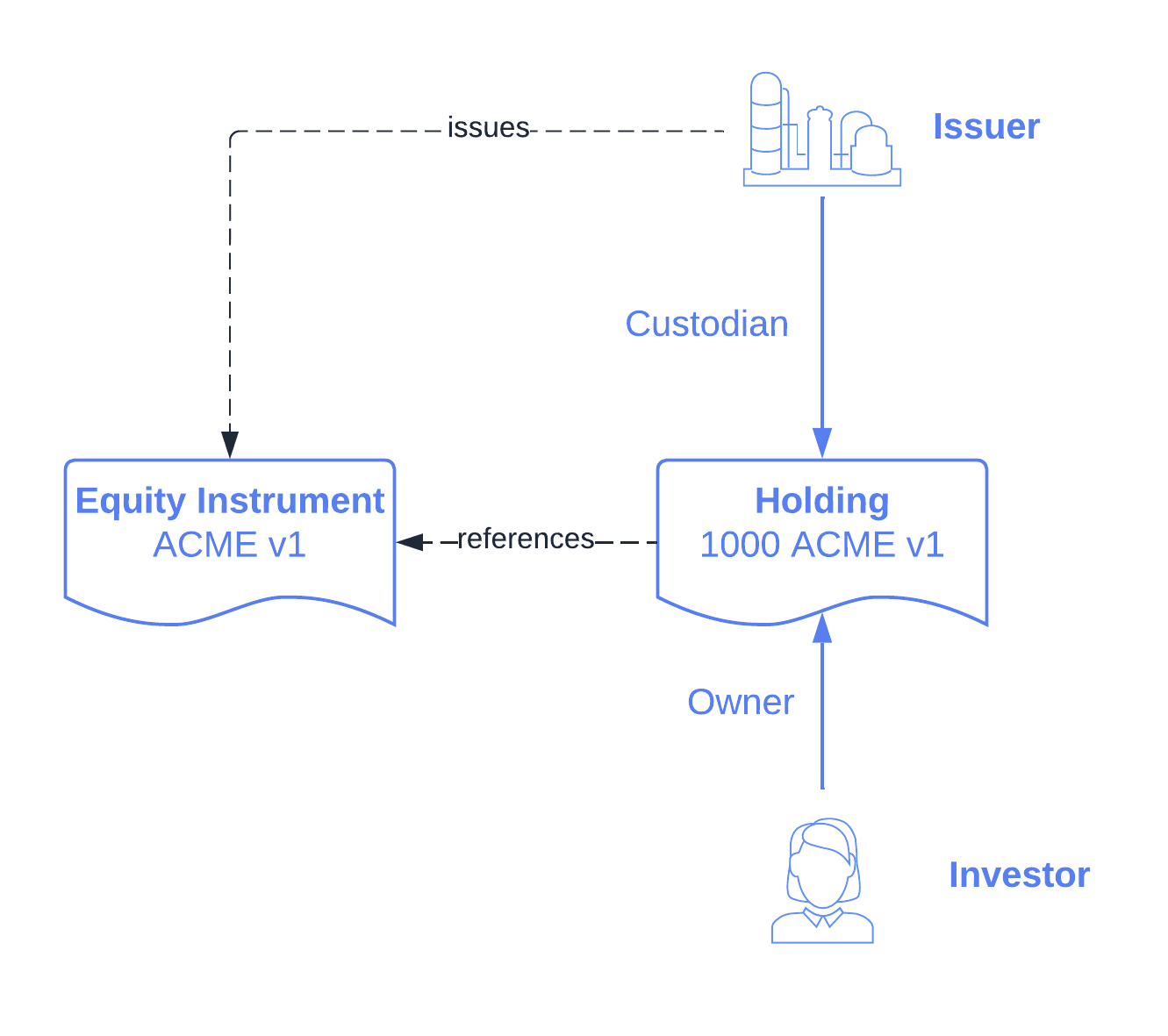 We will now explain each step in the process in detail.

The issuer first creates a new instance of the ACME instrument, assiging a new version. Note that the logic to create the new version of an instrument can also be encoded in the lifecycle rule. The new version is then automatically produced when processing the event as described in the next step.

Now, the issuer creates a lifecycle event defining the terms of dividend. In our example we can use the DistributeDividend choice on the Equity instrument to create such an event. This is merely a convenience choice available for equities, any workflow can be used to create new instrument versions and associated lifecycle events.

The event is now passed into a Distribution Rule, which generates the Lifecycle Effect describing the distribution of assets per unit of ACME stock. The effect refers to a targetInstrument, which is the version of the instrument that can be used by stock holders to claim the cash dividend according to the number of stocks held. By being tied to a specific version we prevent holders from (accidentally or intentionally) claiming a particular effect twice.

The investor can now present its holding of ACME stock along with the corresponding Effect to a Claim Rule. This will instruct settlement for:

Both legs of this settlement are grouped in a Batch to provide atomicity. This ensures that the investor can never claim a dividend twice, as after settlement they only hold the new version of the stock, which is not entitled to the dividend anymore.

Note that the party responsible for claiming an effect can be specified flexibly in the Claim Rule contract. Through this contract, custodians can be given the authority to push a given corporate action to the asset holder as is common in current operating procedures.

The model also supports atomic, intermediated settlement of lifecycle events. For example, if a dividend is to be settled between issuer, custodian, and investor in a single transaction, the custodian (having visibility of both its holding at the issuer and the investor’s holding) can pass in both holdings into the claim rule, and thereby instruct a single batch to settle both sides.

The batch and instructions resulting from claiming an effect can now be settled as described in the Settlement section of the documentation.

The following picture shows the three asset movements involved in this particular example:

The Event interface describes basic properties of a lifecycle event:

The Lifecycle Rule is used to process an event and calculate the resulting lifecycle effect. A lifecycle rule can either assume that a new version of the instrument has already been created (as is the case for the Distribution and Replacement rules), or it can create the new version of the instrument as part of its implementation. The latter can be useful if information required to create the new version is only available upon processing of the event, as is the case for Generic Instrument evolution.

The Claim Rule is used to claim lifecycle effects and instruct settlement thereof. Each effect specifies a target instrument (and version), and holdings on this instrument (version) are required to claim an effect. This serves as proof of ownership such that there is no need for an issuer to take a consistent snapshot of holdings as of a specific date.

The output of the claim rule is a Batch and a set of Instruction s forming an atomic unit of settlement.

Note that multiple holdings can be passed into the claim rule in order to instruct intermediated settlement of an effect, or to instruct atomic settlement for multiple asset holders at the same time.

An Effect describes the asset movements resulting from a particular event. It specifies these movements per unit of a target instrument and version. Holdings on this specific instrument version entitle a holder to claim the effect, which results in the required asset movements to be instructed.