In this section you will test the Token model from Basic Contracts using the Daml Script integration in Daml Studio. You’ll learn about the basic features of:

A Script is like a recipe for a test, letting you script different parties submitting a series of transactions to check that your templates behave as you expect. You can also script some external information like party identities, and ledger time.

Below is a basic script that creates a Token for a party called “Alice”:

With a variable alice of type Party in hand, you can submit your first transaction. Unsurprisingly, you do this using the submit function. submit takes two arguments: the Party and the Commands.

You’ll learn all about the syntax Token with owner = alice in Data Types.

You could write this as submit alice (createCmd Token with owner = alice), but just like scripts, you can assemble commands using do blocks. A do block always takes the value of the last statement within it so the syntax shown in the commands above gives the same result, whilst being easier to read. Note however, that the commands submitted as part of a transaction are not allowed to depend on each other.

There are a few ways to run Daml Scripts:

In Daml Studio, you should see the text “Script results” just above the line token_test_1 = do. Click on it to display the outcome of the script.

In Basic Contracts you learned that creating a Token requires the authority of its owner. In other words, it should not be possible for Alice to create a token for another party and vice versa. A reasonable attempt to test that would be:

submitMustFail never has an impact on the ledger so the resulting tabular script view just shows the two tokens resulting from the successful submit statements. Note the new column for Bob as well as the visibilities. Alice and Bob cannot see each others’ tokens.

To archiveCmd the token Alice has created, you need to get a handle on its contract ID. In scripts, you do this using <- notation. That’s because the contract ID needs to be retrieved from the ledger. How this works is discussed in Add Constraints to a Contract. 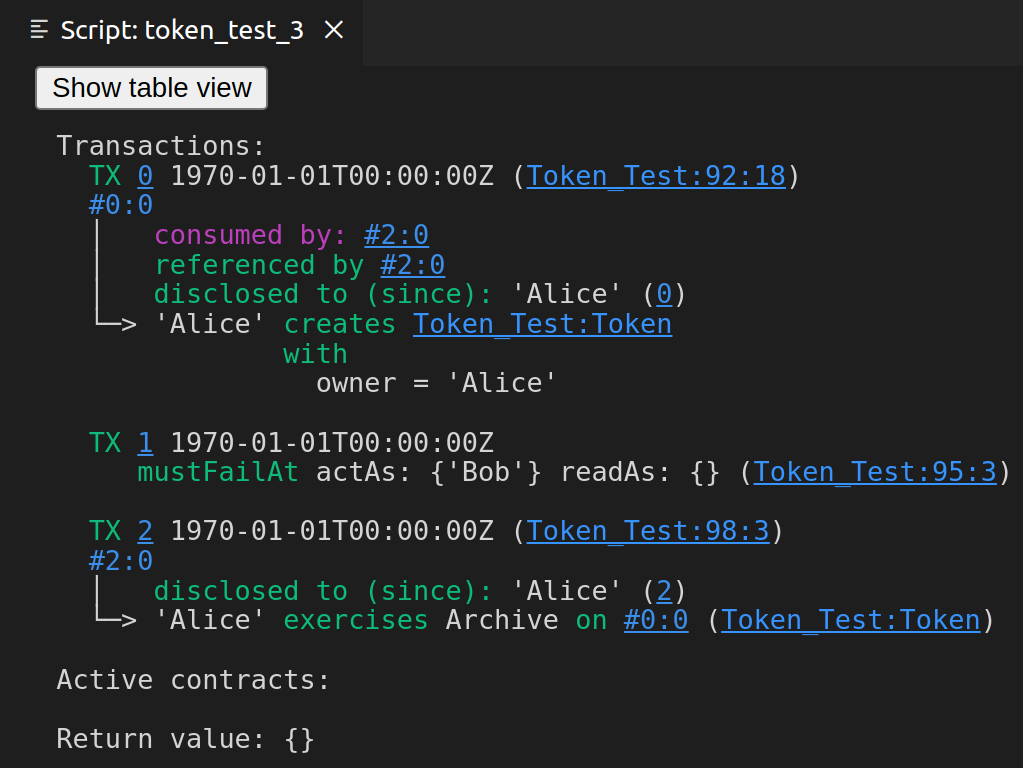 Remember that in Test for Failure we saw a proper error message for a failing submit.

In Data Types you will learn about Daml’s type system, and how you can think of templates as tables and contracts as database rows.