Canton uses Logback as the logging library. All Canton logs derive from the logger com.digitalasset.canton. By default, Canton will write a log to the file log/canton.log using the INFO log-level and will also log WARN and ERROR to stdout.

How Canton produces log files can be configured extensively on the command line using the following options:

For further customization, a custom logback configuration can be provided using JAVA_OPTS.

If you use a custom log-file, the command line arguments for logging will not have any effect, except --log-level-canton and --log-level-root which can still be used to adjust the log level of the root loggers.

We strongly recommend the use of a log file viewer such as lnav to view Canton logs and resolve issues. Among other features, lnav has automatic syntax highlighting, convenient filtering for specific log messages, and allows viewing log files of different Canton components in a single view. This makes viewing logs and resolving issues a lot more efficient than simply using standard UNIX tools such as less or grep.

In particular, we have found the following features especially useful when using lnav:

By default, logging will omit details in order to not write sensitive data into log files. For debug or educational purposes, you can turn on additional logging using the following configuration switches:

In particular, this will turn on payload logging in the ApiRequestLogger, which records every GRPC API invocation, and will turn on detailed logging of the SequencerClient and for the transaction trees. Please note that all additional events will be logged at DEBUG level.

For further debuggability, Canton provides a trace-id which allows to trace the processing of requests through the system. The trace-id is exposed to logback through the mapping diagnostic context and can be included in the logback output pattern using %mdc{trace-id}.

The trace-id propagation is enabled by setting the canton.monitoring.tracing.propagation = enabled configuration option, which is already enabled by default.

It is also possible to configure the service where traces and spans are reported to, for observing distributed traces. Refer to Traces below to see what it looks like.

Currently Jaeger and Zipkin are supported. For example, Jaeger reporting can be configure as follows:

The configuration above will connect to a running Jaeger server to report tracing information.

It is possible to easily run Jaeger in a Docker container as follows:

If you prefer not to use Docker, it is also possible to download the binary for your specific OS at Download Jaeger. Unzip the file and then simply run the binary titled jaeger-all-in-one (no need for providing any arguments to it). By default Jagger will expose port 16686 for its UI which can be seen in a browser window, and port 14250 to which Canton will report trace information. Please make sure to properly expose these ports.

It is also possible to change how often spans are sampled (i.e. reported to the configured exporter). By default it will always report (monitoring.tracing.tracer.sampler.type = always-on). It can also be configured to never report (monitoring.tracing.tracer.sampler.type = always-off, although not super useful). And it can also be configured so that a specific fraction of spans are reported like below:

There is one last property of sampling that can be optionally changed. By default we have parent-based sampling on (monitoring.tracing.tracer.sampler.parent-based = true) which means that a span is sampled iff its parent is sampled (the root span will follow the configured sampling strategy). This way, there will never be incomplete traces, so either the full trace is sampled or not. If this property is changed, all spans will follow the configured sampling strategy ignoring whether the parent is sampled or not.

Not every trace created which can currently be observed in logs are reported to the configured trace collector service. Traces originated at console commands or that are part of the transaction protocol are largely well reported, while other kinds of traces are being added to the set of reported traces as the need arise.

Also, even the transaction protocol trace has a know limitation which is that once some command is submitted (and its trace fully reported), if there are any resulting daml events which are subsequently processed as a result, a new trace is created as currently the ledger api does not propagate any trace context info from command submission to transaction subscription. This can be observed for example by the fact that if a participant creates a Ping contract, it is possible to see the full transaction processing trace of the Ping command being submitted, but then the participant which processes the Ping by exercising Respond and creating the Pong contract will then create a separate trace instead of continuing to use the same one.

Note that this is different than if a single Daml transaction results in multiple actions at the same time (multiple contracts being archived and created). In that case a single trace would encompass the whole process, since it is happening as part of a single transaction as opposed to as a result of some external process reacting to Daml events.

Each span represents a single operation within a trace. A trace is a directed acyclic graph (DAG) of spans, where the edges between spans are defined as parent/child relationships (definitions taken from Opentelemetry’s glossary).

Canton currently reports several different kinds of traces. For example, every Canton console command that interacts with the admin api starts a trace whose initial span last for the whole duration of the command, including the GRPC call to the specific admin api endpoint. 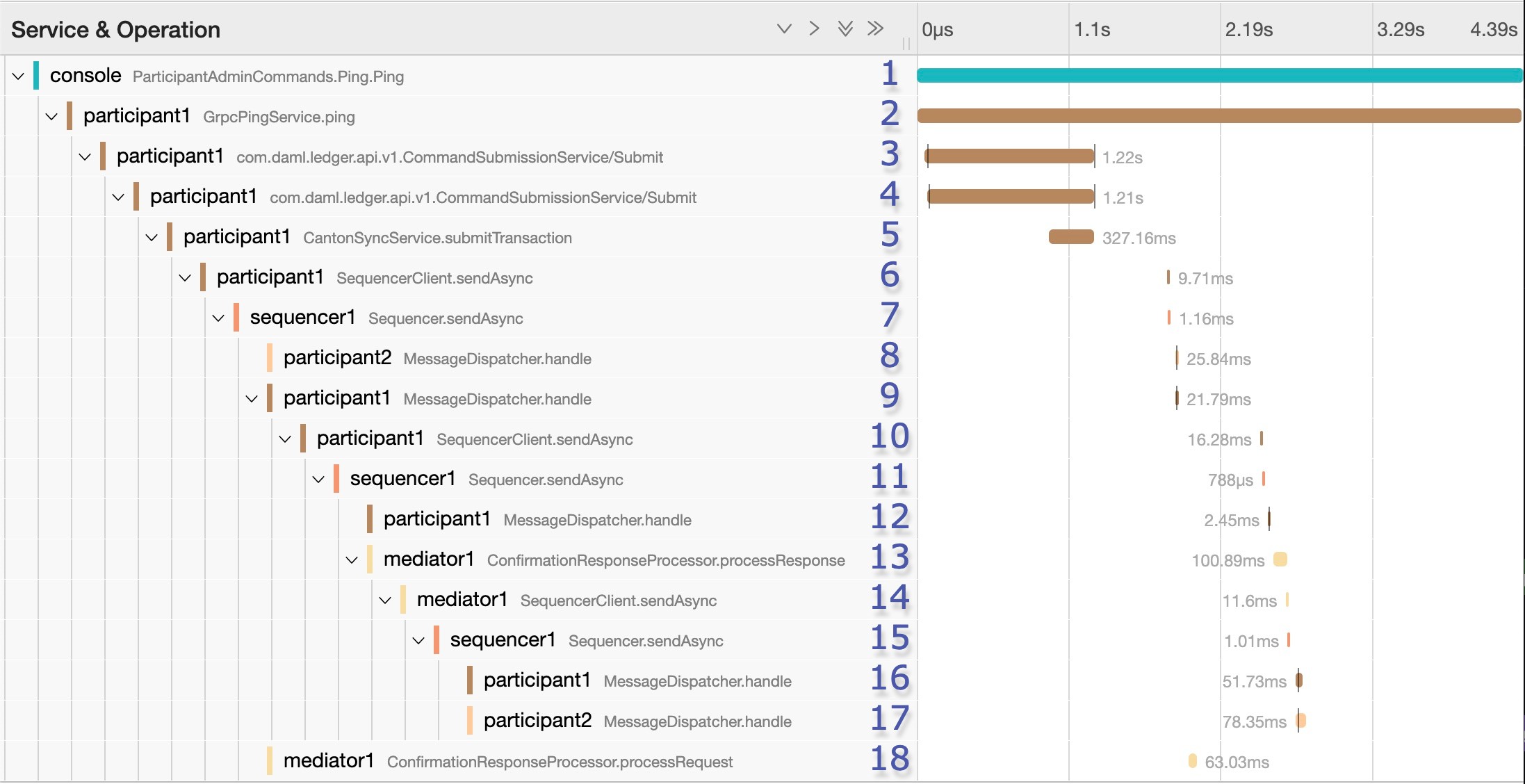 One important trace is the trace of Daml command submission. This trace is illustrated above as part of performing a Canton ping using the console, which contains 18 spans. Note that this is what it looks like as of October 2022, and it may have changed slightly. The current tracing focuses largely on the message exchange via the sequencer, without digging deep into the message handlers and further processing of transactions. We will close those gaps in the future. The ping illustrated here is started by participant1 and has participant2 as the target.

Notice that in some cases spans may start later than the end of their parent, due to their processing happening asynchronously. That is, at a later point, as opposed to during the processing of the predecessor. This typically happens when the new operation gets placed on a queue to be handled later, which immediately frees the parent span and ends it. It is made clear below the moments when this happens.

For context, the Canton ping consists of 3 different Daml commands:

Starting at span 3 in the example trace we see the submission of the first of the three Daml commands (the creation of the Ping contract). Due to a limitation explained in the next section, the other 2 Daml command submissions do not get linked to this whole trace. It is possible to find them separately. In any case span 2 will only complete once the 3 Daml commands are completed.

At span 3 the participant node itself is on the client side of the ledger-api, but in other use cases it could also be an application integrated with the participant. This span lasts for the duration of this GRPC call, which gets received on the server side (span 4) and gets handled by the CantonSyncService (span 5). At this point the request is received and acknowledged, but not fully processed. It is processed asynchronously later on, which means that spans 3 to 5 will complete before the request is actually handled.

Currently missing from the trace, which accounts for some of the gap between spans 5 and 6, is the domain routing where the participant decides which domain to use for the command submission, and the preparation of the initial set of messages to be sent. At span 6 we see the start of the Canton transaction protocol. Here participant1 sends a request to sequencer1 for it to sequence the initial set of confirmation requests messages as part of phase 1 of the transaction protocol.

The transaction protocol has 7 phases. An in-detail document about them will be made available soon, currently a simple description can be found at transaction processing.

At span 7 we see sequencer1 receive the request and register it. Receipt of the messages is not part of this span, as that happens asynchronously at a later point.

At span 18, as part of phase 2, mediator1 receives an informee message and all it needs to do is validate and register it. As it doesn’t need to respond, span 18 has no children.

At span 12, participant1 receives a successful send response message that signals that his message to the mediator was successfully sequenced. This is happening as part of phase 4, where confirmation responses are sent to the mediator. We can see the mediator receive it at span 13, and will then proceed to validate the message (phase 5).

At this point, as we can see in spans 14 and 15, mediator1 (now at phase 6) asks sequencer1 to send the transaction result messages to the participants.

To end this round of the transaction protocol, participant1 and participant2 receive their messages at spans 16 and 17 respectively. The messages are asynchronously validated and their projections of the virtual shared ledger are updated (phase 7).

As mentioned, there are 2 other transaction submission which are unlinked from this ping trace but are part of the operation. It is also possible to find them. The second one starts at a span titled admin-ping.processTransaction which is created by participant2, and the third one has the same name but is initiated by participant1.

will return a status object which can be one of

Depending on the node type, the NodeStatus will differ. A participant node will respond with a message containing

A domain topology manager or a mediator node will return

In order to provide efficient support, we need as much information as possible. For this purpose, Canton implements an information gathering facility that will gather key essential system information for our support staff. Therefore, if you encounter an error where you need our help, please ensure the following:

This will create a dump file (.zip) that stores the following information:

Please provide the gathered information together with the exact list of steps you did that lead to the issue to your support contact. Providing complete information is very important to us in order to help you troubleshoot your issues.

When running a console configured to access remote nodes, the health.dump() command will gather health data from the remote nodes and package them in the resulting zip files. There is no special action required. It is also possible to obtain the health data of a specific node by targeting it when running the command.

When packaging large amounts of data, it can be useful to increase the default timeout of the dump command:

The canton process can optionally expose an HTTP endpoint indicating if the process believes it is healthy. This is intended for use in uptime checks and liveness probes. If enabled, the /health endpoint will respond to a GET http request with a 200 HTTP status code if healthy or 500 if unhealthy (with a plain text description of why it is unhealthy).

This health check will have participant1 “ledger ping” itself every 30 seconds. The process will be considered healthy if the ping is successful.

Additionally, metrics can be written to a file

or reported via Graphite (to Grafana) using

or reported via Prometheus (to Grafana) using

When using the graphite or csv reporters, Canton will periodically evaluate all metrics matching the given filters. It is therefore advisable to filter for only those metrics that are relevant to you.

In addition to Canton metrics, the process can also report Daml metrics (of the ledger api server). Optionally, JVM metrics can be included using

If a Prometheus metrics reporter is configured, we expose these common metrics for all gRPC endpoints (i.e., helping you to measure the four golden signals).